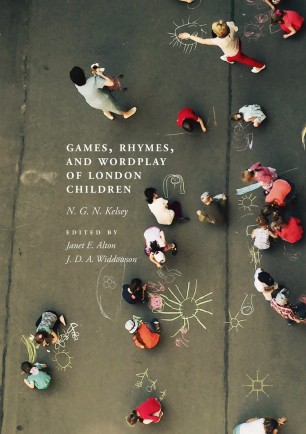 This book presents a unique annotated collection of some 2000 playground games, rhymes, and wordplay of London children. It charts continuity and development in childlore at a time of major social and cultural change and offers a detailed snapshot of changes in the traditions and language of young people. Topics include: starting a game; counting-out rhymes; games (without songs); singing and chanting games; clapping, skipping, and ball bouncing games; school rhymes and parodies; teasing and taunting; traditional belief and practice; traditional wordplay; and a concluding miscellany. Recorded mainly in the 1980s by primary schoolteacher Nigel Kelsey, transcribed verbatim from the children’s own words, and accompanied by extensive commentaries and annotation, the book sets a wealth of new information in the wider historical and contemporary context of existing studies in Britain, Ireland, and other parts of the English-speaking world. This valuable new resource will open new avenues for research and be of particular interest to folklorists and linguists, as well as to those working across the full spectrum of social, cultural, and educational studies.
N. G. N. Kelsey worked as a primary school teacher in London from 1952 until his retirement in 1982. During this time, he collected examples of the language and lore of the children under his care.
Janet E. Alton is an independent researcher based at the Centre for English Traditional Heritage, UK.
J. D. A. Widdowson is Director of the Centre for English Traditional Heritage, UK.

N. G. N. Kelsey worked as a primary school teacher in London from 1952 until his retirement in 1982. During this time, he collected examples of the language and lore of the children under his care.
Janet E. Alton is an independent researcher based at the Centre for English Traditional Heritage, UK.
J. D. A. Widdowson is Director of the Centre for English Traditional Heritage, UK.
Janet E. Alton and J. D. A. Widdowson have collaborated on projects and publications in linguistics and folklore for over forty years, within the National Centre for English Cultural Tradition (NATCECT) at the University of Sheffield, which Professor Widdowson founded in 1964 and directed until 2004. Janet Alton took a master’s degree in NATCECT, later appointed Honorary Research Associate, and a Leverhulme Fellowship enabled her to begin adding the wealth of annotations and references to Nigel Kelsey’s basic collection. Professor Widdowson founded the Centre for English Traditional Heritage (CETH) in 2000 and he and Janet co-edit the Centre’s e-journal, Tradition Today. Professor J. D. A. Widdowson’s doctoral dissertation was on the traditional social control of children. He is an internationally respected scholar, author of a wide range of books and articles on English language, linguistics, and cultural tradition, and member of all the major learned societies in the field. Hon DLitt, Memorial University of Newfoundland. Hon DLitt, University of Edinburgh. Awarded the Folklore Society’s prestigious Coote Lake Medal in 2000.

“Games, Rhymes and Wordplay of London Children is an extensive collection of approximately 2,000 games, songs, rhymes, and wordplay. … He supported his documentation of games, rhymes, and songs with a clear description of his methodology, making this a particularly valuable resource for those working in the field of research into children’s cultures and education.” (Athena Lill, Folk Music Journal, 2021)

“The publication of this monumental and impressive treatment of archive material and collectanea should be regarded as a major event. It is an encyclopaedic collection of children's lore from London, from a tightly defined age group, collected within a well-defined time window, with proper provenance for it all, and cross-referenced to comparable material in the public domain. Not only is the referencing and cataloguing useful, but this is an outstanding example of a focused and precise ethnographic undertaking. The short introductory sections are also full of useful directions for further study and careful reflections on the origins and popularity of some of the materials.” (The Katharine Briggs Folklore Award Committee)

“Children’s lore is a fascinating mixture of the old and new, and of continuity and change. They will draw readily on the up-to-date mass media of the day, and in the next minute sing a tune hundreds of years old. They can be sticklers for the rules, but change them at a moment’s notice if circumstances dictate. Kelsey’s is without doubt the most comprehensive collection made in London in the later twentieth century, particularly valuable because he succeeded in capturing the children’s traditional world in all its wonderful chaos, colour, and irreverence. And he was experienced enough to provide an insightful commentary on the material he found. The editors of this book have done an excellent job organising the material and providing notes and references to other collections. The result is both a scholarly reference work for generations to come, and a joy to read in the present.” (Steve Roud, author of Folk Song in England (2016), The Lore of the Playground (2011), and co-author of A Dictionary of English Folklore (2000) amongst other works. He is the creator of the Folk Song Index and served as Honorary Librarian of the Folklore Society, UK)

“It is really exciting that Nigel Kelsey’s collection of more than 2,000 games, songs, wordplay, beliefs and practices, and other kinds of folklore from children in inner-city London is about to be published. Between 1966 and 1984, as a primary school teacher, Kelsey gathered this material from preadolescents. The quality of his scholarship is outstanding; there are many significant analyses of the historical, cultural, developmental, and social dimensions of children’s folklore. With meticulous annotations, this collection constitutes a treasure trove of information and insights for scholars. It will also be of great interest to general readers who are interested in the dynamic transmission of children’s traditions.” (Elizabeth Tucker, Distinguished Service Professor of English, Binghamton University, USA)

“This book coheres with a long and honourable tradition of folkloric research and analysis.  Its focus is the folklore of children – still a neglected field of academic study. The authors have built on the fieldwork of an earlier scholar to produce a learned historical, sociological and linguistic study of the playlore of children in inner London in the latter part of the 20th century. They have connected their source material with relevant research undertaken in other countries, particularly English-speaking societies. It will interest all who seek to remember and explore the lore and language of children at play.” (June Factor, Honorary Senior Fellow, University of Melbourne, Australia)