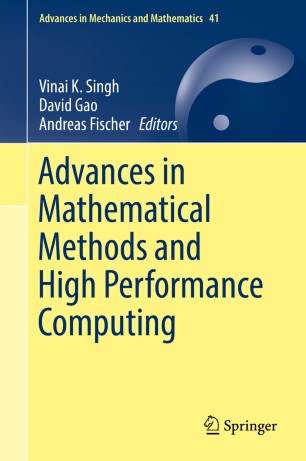 Part of the Advances in Mechanics and Mathematics book series (AMMA, volume 41)

This special volume of the conference will be of immense use to the researchers and academicians. In this conference, academicians, technocrats and researchers will get an opportunity to interact with eminent persons in the field of Applied Mathematics and Scientific Computing. The topics to be covered in this International Conference are comprehensive and will be adequate for developing and understanding about new developments and emerging trends in this area. High-Performance Computing (HPC) systems have gone through many changes during the past two decades in their architectural design to satisfy the increasingly large-scale scientific computing demand. Accurate, fast, and scalable performance models and simulation tools are essential for evaluating alternative architecture design decisions for the massive-scale computing systems. This conference recounts some of the influential work in modeling and simulation for HPC systems and applications, identifies some of the major challenges, and outlines future research directions which we believe are critical to the HPC modeling and simulation community.

Vinai K Singh is the Professor of Mathematics in the Department of Applied Mathematics, Inderprastha Engineering College Ghaziabad, India. Dr. Singh holds a Ph. D degree. in Approximation Theory from Department of Applied Mathematics, Institute of Technology, Banaras Hindu University (Now IIT BHU), Varanasi, India. He has been actively engaged in research activity since 1997. His areas of research interest include functional analysis, approximation theory, and different kinds of positive operators. He is author of 3 book chapters and 6 books and over 29 research papers in the national and International Journals of repute. He referees articles for professional journals and serves as editorial member of many national and international journals.
David Y Gao is the Alexander Rubinov Chair Professor of Mathematics at the Federation University Australia. He is the author of 14 monograph, handbook, special volumes and more than 200 research papers (> 50% are single authored) on applied mathematics, theoretical and computational mechanics, global optimization and operations research etc. His main research contributions include a canonical duality-triality theory, several mathematical models in engineering mechanics and material science, a series of complete solutions to a class of nonconvex/nonsmooth/discrete problems in nonlinear sciences, and some deterministic methods/algorithms for solving certain NPhard problems in global optimization and computational science. One application of this canonical duality theory in large deformation solid mechanics solved a 50-years open problem and leads to a pure complementary energy principle (i.e. the Gao Principle in the literature), which has broad applications in engineering mechanics and physics. One of the large deformed beam models he proposed in 1996 is now recognized as the nonlinear Gao beam which can be used to study postbuckling analysis and plays an important role in real-world applications. In discrete systems, this canonical duality theory shows that the NP-hard 0-1 integer programming problems are identical to a continuous unconstrained Lipschitzian global optimization problem which can be solved deterministically. Professor Gao’s multidisciplinary research has been supported continuously by different programs at US National Science Foundation (NSF) and US Air Force Office for Scientific Research (AFOSR) before he moved to Australia in 2010. He is one of a few researchers in the southern hemisphere who receive research grants every year directly from the AFOSR Washington Office. Recently, Professor Gao’s canonical duality-triality theory has been identified by AFOSR as a breakthrough research and his team has win two prestigious international grant awards with total US$600,000 for 2016-2020.
Andreas Fischer is director of the Institute of Numerical Mathematics at TU Dresden. After his habilitation in 1998, he became an associate professor at the University of Dortmund. Since 2002, he holds the Chair of Numerical Optimization at TU Dresden. His research concentrates on topics around the design and analysis of efficient algorithms in the field of mathematical programming. With his group, he works on theoretical and applied problems in continuous and discrete optimization. For example, this includes generalized Nash equilibria, eigenvalue complementarity problems, beamforming for wireless board-to-board communication, resource allocation, parameter optimization in machine learning, or minimum connectivity inference problems. Currently, he is a principal investigator at the Collaborative Research Center Highly Adaptive Energy-efficient Computing (HAEC) and of further research projects. Andreas Fischer is in the editorial board of several international journals.