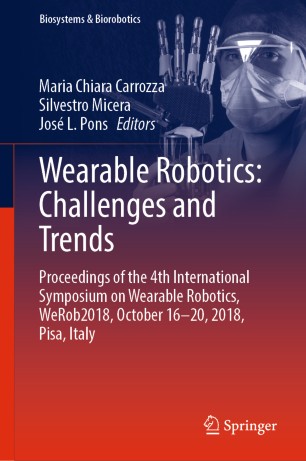 The book reports on advanced topics in the areas of wearable robotics research and practice. It focuses on new technologies, including neural interfaces, soft wearable robots, sensors and actuators technologies, and discusses important regulatory challenges, as well as clinical and ethical issues. Based on the 4th International Symposium on Wearable Robotics, WeRob2018, held October 16-20, 2018, in Pisa, Italy, the book addresses a large audience of academics and professionals working in government, industry, and medical centers, and end-users alike. It provides them with specialized information and with a source of inspiration for new ideas and collaborations. It discusses exemplary case studies highlighting practical challenges related to the implementation of wearable robots in a number of fields. One of the focus is on clinical applications, which was encouraged by the colocation of WeRob2018 with the International Conference on Neurorehabilitation, INCR2018. Additional topics include space applications and assistive technologies in the industry. The book merges together the engineering, medical, ethical and political perspectives, thus offering a multidisciplinary, timely snapshot of the field of wearable technologies.

“The aim of the collection is to advance the understanding of biological systems from an engineering perspective as well as to inform readers about the newest technologies in the field of biomechanics and robotics. … This is a nice compilation of the articles presented at the conference. The individual articles are written appropriately for conference proceedings. This book is on par with other collections of conference proceedings … .” (Alexander Barry, Doody's Book Reviews, April, 2019)
Buy options