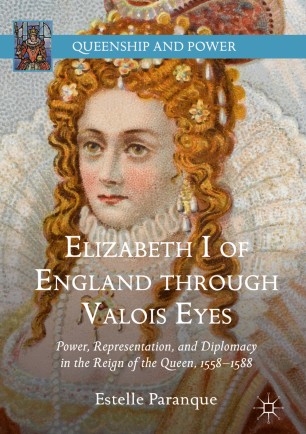 Elizabeth I of England through Valois Eyes

This book examines the first thirty years of Elizabeth I’s reign from the perspective of the Valois kings, Charles IX and Henri III of France. Estelle Paranque sifts through hundreds of French letters and ambassadorial reports to construct a fuller picture of early modern Anglo-French relations, highlighting key events such as the St. Bartholomew’s Day Massacre, the imprisonment and execution of Mary, Queen of Scots, and the victory of England over the Spanish Armada in 1588. By drawing on a wealth of French sources, she illuminates the French royal family’s shifting perceptions of Elizabeth I and suggests new conclusions about her reign.

Estelle Paranque is Lecturer in Early Modern History at the New College of the Humanities and Honorary Research Fellow at the University of Warwick’s Center for the Study of the Renaissance, UK. She has published several essays on Elizabeth I of England and Henri III of France and has co-edited two volumes of essays on medieval and early modern European queens.

“Drawing on a treasure trove of manuscripts that have never before been translated or published, this massively researched book offers a valuable new perspective on the first thirty years of Elizabeth I’s reign. Even readers thoroughly familiar with her reign will be jolted into fresh perceptions by re-encountering the story from the French point of view.” (Ilona Bell, Clarke Professor of English Emerita, Williams College, USA)

“In this fascinating study, Estelle Paranque has examined thousands of letters between the French ambassadors to England and their royal masters—many little known to English scholars and translated here—to provide a wealth of new insight into how Elizabeth I was represented among foreign observers, while also allowing us to hear her own thoughts in reported speech. The picture that emerges is of a very different Elizabeth I than the one with which we’re familiar. This sparkling new work gives us what historians long for: a fresh perspective on one of England’s best-loved queens.” (Suzannah Lipscomb, Reader in Early Modern History, University of Roehampton, UK)