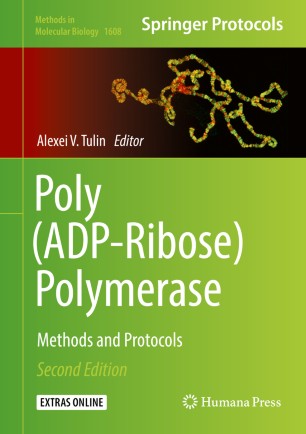 This book presents multiple new and classical methods for studying the vital poly-ADP-ribose (pADPr) pathway. Beginning with techniques for the detection and quantification of the product of poly(ADP-ribose) polymerase (PARP) enzymatic activity and detection of variation in pADPr production during the cell cycle, the volume continues with sections on the identification of pADPr protein acceptors, methods focusing on studying molecular mechanisms of PARP functions in eukaryotic cells, particularly those involved in control of DNA repair and oxidative stress, as well as in expression regulation, approaches to the in vitro reconstitution of PARP-1 interaction with chromatin, the development and testing of small molecule PARP inhibitors, and the functions of understudied members of PARP family.  Written for the highly successful Methods in Molecular Biology series, chapters include introductions to their respective topics, lists of the necessary materials and reagents, step-by-step, readily reproducible laboratory protocols, and tips on troubleshooting and avoiding known pitfalls.
Authoritative and practical, Poly(ADP-Ribose) Polymerase: Methods and Protocols, Second Edition serves as an ideal companion to the first edition for scientists whose investigations involve this important pathway.
The chapter 'Identifying and Validating Tankyrase Binders and Substrates: A Candidate Approach' is published open access under a CC BY 4.0 license.