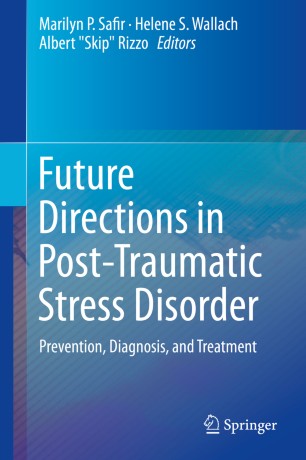 Ours is an era of increasing tension, both global and local. And not surprisingly, PTSD is recognized not only in combat veterans and active military personnel, but also disaster and assault survivors across the demographic spectrum. As current events from mass shootings to the debate over trigger warnings keep the issue in the public eye, the disorder remains a steady concern among researchers and practitioners.

Future Directions in Post-Traumatic Stress Disorder presents findings and ideas with the potential to influence both our conceptualization of the condition and the techniques used to address it. A multidisciplinary panel of experts offers new analyses of risk and resilience factors, individual and group approaches to prevention, the evolving process of diagnosis, and effective treatment and delivery. Chapters on treatment allow readers to compare widely-used prolonged exposure and VR methods with innovative applications of cognitive processing therapy and interpersonal therapy. And an especially compelling contribution surveys empirically-based programs relating to what for many is the emblematic trauma of our time, the events of September 11, 2001. Included in the  coverage:

Marilyn P. Safir is Professor Emeritus, (specializing in Clinical and Social Psychology.) Safir was a founder of, and the second President of the Israeli Association of Cognitive Behavior Therapy, and received its First Award as Outstanding Member in Recognition for the Establishment of and Contributions to CBT in Israel. She also received the Award for Contributions to International Psychology from The American Psychological Association’s Division for International Psychology (52)  and was its first recipient as  Distinguished Visiting Professor.  She was also a founding Fellow of APA’s Division (56) Trauma Psychology, and a founding Fellow of the American Psychological Society (APS).

Helene S. Wallach received her PhD in Clinical Psychology from the University of Western Ontario, is a certified supervising Clinical Psychologist, a certified hypnotherapist, a certified marital and family therapist. Her teaching and research interests are varied: Forensic psychology – former head of criminology program in a University college, parole committee member, research in jail and in forensic wards in psychiatric hospitals; CBT – supervisor, co-founded a CBT internship program, a CBT post-grad psychotherapy program, as well as research on various aspects; VR – research into presence in VRCBT as well as efficacy of VRCBT; Pain – research into pain alleviation.  Helene chaired sessions in conferences and reviewed grant proposals and papers.

Albert “Skip” Rizzo received his Ph.D. in Clinical Psychology from the SUNY-Binghamton and is the Medical Virtual Reality Director at the USC Institute for Creative Technologies. He has Research Professor appointments with the USC Dept. of Psychiatry and the USC Davis School of Gerontology. Skip conducts research on the design, development and evaluation of Virtual Reality (VR) systems for clinical applications. This work spans the domains of psychological, cognitive and motor functioning in both healthy and clinical populations. In 2010, he received the APA D56 Award for Outstanding Contributions to the Practice of Trauma Psychology for his R&D work on VR exposure therapy.

“The editors have chosen a comprehensive biopsychosocial model that integrates and continues to guide future work on PTSD. … It would be an excellent handbook for experienced psychologists to review general data and to explore more recent research and clinical applications. In a very organized, clear fashion, the editors have compiled a book that would be of value to researchers, clinicians, students, policy makers, and public health professionals.” (Dolores McCarthy, PsycCRITIQUES, Vol. 60 (48), November, 2015)