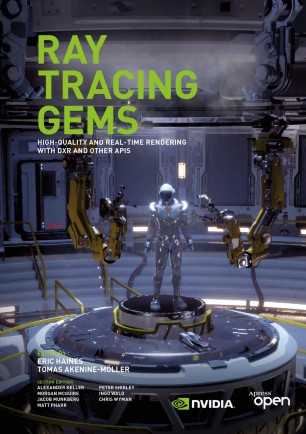 High-Quality and Real-Time Rendering with DXR and Other APIs

This book is a must-have for anyone serious about rendering in real time. With the announcement of new ray tracing APIs and hardware to support them, developers can easily create real-time applications with ray tracing as a core component. As ray tracing on the GPU becomes faster, it will play a more central role in real-time rendering. Ray Tracing Gems provides key building blocks for developers of games, architectural applications, visualizations, and more. Experts in rendering share their knowledge by explaining everything from nitty-gritty techniques that will improve any ray tracer to mastery of the new capabilities of current and future hardware.
What you'll learn:
Who is this book for:

Tomas Akenine-Möller is a Distinguished Research Scientist at NVIDIA, Sweden, since 2016, and currently on leave from his position as professor in computer graphics at Lund University. Tomas couathored Real-Time Rendering and Immersive Linear Algebra, and has written 100+ research papers. Previously, he worked at Ericsson Research and Intel.
Eric Haines currently works at NVIDIA on interactive ray tracing. He co-authored the books Real-Time Rendering, 4th Edition and An Introduction to Ray Tracing, edited The Ray Tracing News, and cofounded the Journal of Graphics Tools and the Journal of Computer Graphics Techniques. He is also the creator and lecturer for the Udacity MOOC Interactive 3D Graphics.