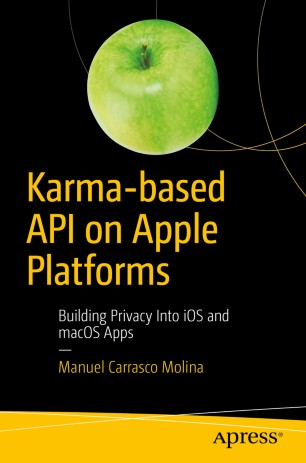 Leverage the best techniques provided by Apple to build apps with maximum privacy for your users. This book explores not only the how-to steps for implementing privacy in your apps, but also answers workflow questions about what information you actually need.

Do you need full access to a device’s contacts? Do you need to have location services enabled in the background constantly? This book explains how to selectively enable services and how to make apps that can continue to function even when the user refuses to share data. Understanding the needs of your users and the expectations of Apple in reviewing your app will make better apps.

You'll see how to ensure that you make it through the App Store review quickly and without the need to go back and develop privacy protocols that should have been in place to begin with. Not only is developing with privacy in mind good from a moral standpoint, but it also helps you create leaner apps that set themselves up for less potential data breaches and issues later on in distribution.

Based in Düren, Germany, near Cologne, Manuel Carrasco Molina, better known as StuFF mc, started programming with his C64 at age 11 in 1987. He entered professional software development in 1997 and has been developing since. He founded the first French podcast about Apple in 2005 and dove into iOS development at the launch of the SDK in 2008, after spending the first half of his developer career in the Microsoft technologies. He ran ObjCGN.com/SwiftConf.com from 2012 to 2017 which he left in good hands at a previous employer. When he's not developing for the Apple Platforms Stuff is an involved activist and/or local politician (4 years at the city council) in the matters of environment (Hambach Forest) and refugees — he spent a few times in east european countries helping his brothers and sisters. Stuff's mother tongue is French, but he also speaks fluently German and Spanish, while speaking a bit of Dutch, Arabic and Italian.