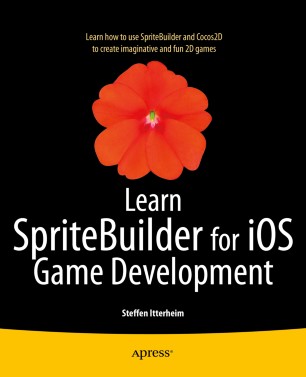 SpriteBuilder is the fun and versatile game development environment that is a natural successor to Cocos2D, Cocos3D, and Chipmunk2D. In Learn SpriteBuilder for iOS Game Development, experienced game developer and author Steffen Itterheim shows you how to get the most out of SpriteBuilder to create a full-featured 2D action game that you can use as a basis for your own games.

You'll learn SpriteBuilder best practices, how to incorporate SpriteBuilder into your game development workflow, and how to use the various features of SpriteBuilder, including game physics, scrolling, menus, and playing audio assets. You'll learn everything from the basics to advanced topics like visual effects, soft-body physics, rendering textured polygons and porting to Android. You'll be using both SpriteBuilder and the latest version of Cocos2D, version 3. If you have a bit of iOS development experience and you want to learn to create imaginative 2D games, Learn SpriteBuilder for iOS Game Development is exactly the book you need.

Steffen Itterheim is a professional games and tools developer. He has worked for Electronic Arts Phenomic for the past seven years. Be it scripting, programming, or foreign languages, he's done it all. He has extensive experience with game localization including non-western languages and locales, and he also knows the Lua scripting language inside and out. He learned English by watching too much American television. Steffen currently lives in Ingelheim, Germany.