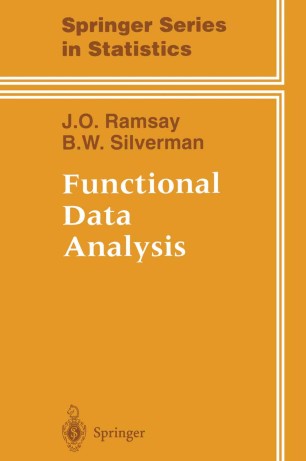 Scientists today collect samples of curves and other functional observations. This monograph presents many ideas and techniques for such data. Included are expressions in the functional domain of such classics as linear regression, principal components analysis, linear modelling, and canonical correlation analysis, as well as specifically functional techniques such as curve registration and principal differential analysis. Data arising in real applications are used throughout for both motivation and illustration, showing how functional approaches allow us to see new things, especially by exploiting the smoothness of the processes generating the data. The data sets exemplify the wide scope of functional data analysis; they are drwan from growth analysis, meterology, biomechanics, equine science, economics, and medicine. The book presents novel statistical technology while keeping the mathematical level widely accessible. It is designed to appeal to students, to applied data analysts, and to experienced researchers; it will have value both within statistics and across a broad spectrum of other fields. Much of the material is based on the authors' own work, some of which appears here for the first time. Jim Ramsay is Professor of Psychology at McGill University and is an international authority on many aspects of multivariate analysis. He draws on his collaboration with researchers in speech articulation, motor control, meteorology, psychology, and human physiology to illustrate his technical contributions to functional data analysis in a wide range of statistical and application journals. Bernard Silverman, author of the highly regarded "Density Estimation for Statistics and Data Analysis," and coauthor of "Nonparametric Regression and Generalized Linear Models: A Roughness Penalty Approach," is Professor of Statistics at Bristol University. His published work on smoothing methods and other aspects of applied, computational, and theoretical statistics has been recognized by the Presidents' Award of the Committee of Presidents of Statistical Societies, and the award of two Guy Medals by the Royal Statistical Society.