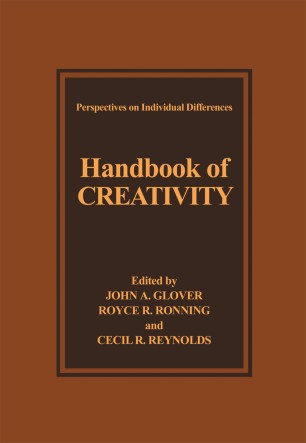 The motivation underlying our development of a "handbook" of creativity was different from what usually is described by editors of other such volumes. Our sense that a handbook was needed sprang not from a deluge of highly erudite studies calling out for organization, nor did it stem from a belief that the field had become so fully articulated that such a book was necessary to provide summation and reference. Instead, this handbook was conceptualized as an attempt to provide structure and organization for a field of study that, from our perspective, had come to be a large-scale example of a "degenerating" research program (see Brown, Chapter 1). The handbook grew out of a series of discussions that spanned several years. At the heart of most of our interactions was a profound unhappiness with the state of research on creativity. Our consensus was that the number of "good" works published on creativity each year was small and growing smaller. Further, we could not point to a journal, text, or professional organization that was providing leadership for the field in shaping a scientifically sound framework for the development of research programs in creativity. At the same time, we were casting about for a means of honoring a dear friend, E. Paul Torrance. Our decision was that we might best be able to honor Paul and influence research on creativity by developing a handbook designed to challenge traditional perspectives while offering research agendas based on contemporary psychological views.