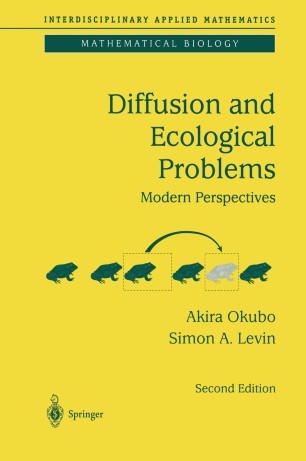 This substantially expanded and updated version of the classic 1980 book by the late Akira Okubo traces the developments that have flowed from the original work, building on detailed notes he left for revision. The first edition was a comprehensive treatment of the use of diffusion models in ecology that integrated rigorous mathematical theory and substantive applications. Enormous in scope, covering a wide variety of topics and including models of spread, critical patch size, and grouping, it has remained one of the most popular books in mathematical biology and has stimulated extensive research in the two decades since its publication. In this volume, friends and disciples of Okubo incorporate a wide range of results from their own fields that build upon the framework he first established.

"This book is the second edition of the popular and very influential book of A. Okubo … . The reader will find a great deal of biological interpretation and discussion … . A valuable asset of the book is the reference list that contains well over one thousand literature citations. S. Levin and his colleagues are to be commended and congratulated on this volume, which undoubtedly will continue well into the future to hold its legendary status in the field of diffusion processes in biology." (Jim M. Cushing, Zentralblatt Math, Vol. 1027, 2004)

"This is a revised and expanded version of Okubo’s classic 1980 text Diffusion and Ecological Problems: Mathematical Models. While building on the original text, the revision has brought the subject well into the 21st century … . The result is an excellent book on the role of diffusion theory in modern spatial ecology. … Okubo was an exceptional scientist … . His expertise and enthusiasm for the subject is reflected in this recent edition, and they are shared by his coauthor." (Mark Lewis, SIAM Review, Vol. 45 (1), 2003)

"This second edition is a substantially revised and updated version of Okuba’s classical monograph from 1980. … The structure is the same as before but every chapter has been thoroughly revised and modern developments have been included. … This book is a beautiful example of how interesting mathematics can arise from important biological problems and how this mathematics feeds back into their understanding." (R. Bürger, Monatshefte für Mathematik, Vol. 140 (2), 2003)

"At a range of more than 20 years, Okubo’s ‘Diffusion and Ecological Problems’ still stands like a mighty peak, by which a host of ecological modellers steer their research voyages. This considerably extended and updated Second Edition … is a timely and, more importantly, a worthy successor. … Overall, the great value of this Second Edition is its encyclopaedic coverage of those dynamic ecological phenomena in which diffusion plays a crucial role." (John Brindley, UK Nonlinear News, March, 2003)

"This is the posthumous second edition of Okubo’s Diffusion and Ecological Problems: Mathematical Models (1980) … . The text is both clear and mathematically rigorous. Even if equations are not to your taste, there is still much to enjoy, especially on animal movements and swarming. This is an essential work of reference for mathematical ecologists, idiosyncratic but a pleasure to read. Levin and his chapter editors are to be congratulated on a fine tribute to their friend." (Bulletin of the British Ecological Society, Vol. 34 (1), 2003)

"This book provides scientists … with a background in the mathematics and physics of diffusion, and how it can be applied to ecological problems. A wide variety of mathematical models of diffusion are surveyed in the ecological context. … I found this book very interesting to read … . For people working in the field, this book is probably very useful as a review book. For people working in other fields, I found this book to contain a very good introduction … ." (Peter Leoni, Physicalia, Vol. 28 (4-6), 2006)