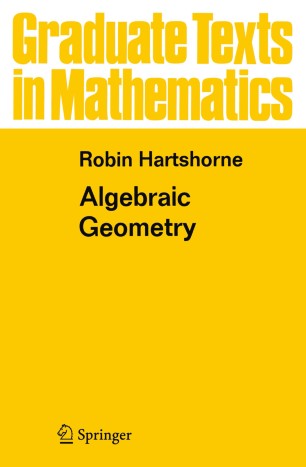 Robin Hartshorne studied algebraic geometry with Oscar Zariski and David Mumford at Harvard, and with J.-P. Serre and A. Grothendieck in Paris. After receiving his Ph.D. from Princeton in 1963, Hartshorne became a Junior Fellow at Harvard, then taught there for several years. In 1972 he moved to California where he is now Professor at the University of California at Berkeley. He is the author of "Residues and Duality" (1966), "Foundations of Projective Geometry (1968), "Ample Subvarieties of Algebraic Varieties" (1970), and numerous research titles. His current research interest is the geometry of projective varieties and vector bundles. He has been a visiting professor at the College de France and at Kyoto University, where he gave lectures in French and in Japanese, respectively. Professor Hartshorne is married to Edie Churchill, educator and psychotherapist, and has two sons. He has travelled widely, speaks several foreign languages, and is an experienced mountain climber. He is also an accomplished amateur musician: he has played the flute for many years, and during his last visit to Kyoto he began studying the shakuhachi.

"Enables the reader to make the drastic transition between the basic, intuitive questions about affine and projective varieties with which the subject begins, and the elaborate general methodology of schemes and cohomology employed currently to answer these questions."—MATHEMATICAL REVIEWS