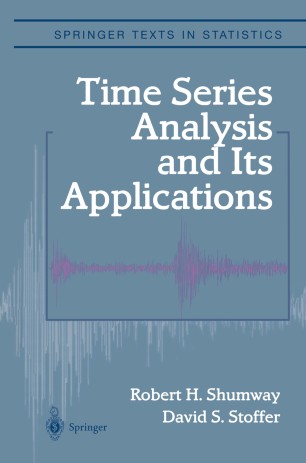 Time Series Analysis and Its Applications

The goals of this book are to develop an appreciation for the richness and versatility of modern time series analysis as a tool for analyzing data, and still maintain a commitment to theoretical integrity, as exemplified by the seminal works of Brillinger (1981) and Hannan (1970) and the texts by Brockwell and Davis (1991) and Fuller (1995). The advent of more powerful computing, es­ pecially in the last three years, has provided both real data and new software that can take one considerably beyond the fitting of·simple time domain mod­ els, such as have been elegantly described in the landmark work of Box and Jenkins (1970). The present book is designed to be useful as a text for courses in time series on several different levels and as a reference work for practition­ ers facing the analysis of time-correlated data in the physical, biological, and social sciences. We believe the book will be useful as a text at both the undergraduate and graduate levels. An undergraduate course can be accessible to students with a background in regression analysis and might include Sections 1. 1-1. 8, 2. 1-2. 9, and 3. 1-3. 8. Similar courses have been taught at the University of California (Berkeley and Davis) in the past using the earlier book on applied time series analysis by Shumway (1988). Such a course is taken by undergraduate students in mathematics, economics, and statistics and attracts graduate students from the agricultural, biological, and environmental sciences.