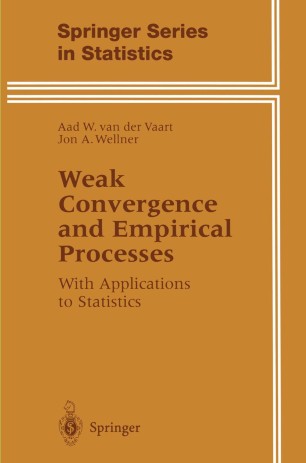 With Applications to Statistics

This book tries to do three things. The first goal is to give an exposition of certain modes of stochastic convergence, in particular convergence in distribution. The classical theory of this subject was developed mostly in the 1950s and is well summarized in Billingsley (1968). During the last 15 years, the need for a more general theory allowing random elements that are not Borel measurable has become well established, particularly in developing the theory of empirical processes. Part 1 of the book, Stochastic Convergence, gives an exposition of such a theory following the ideas of J. Hoffmann-J!1Jrgensen and R. M. Dudley. A second goal is to use the weak convergence theory background devel­ oped in Part 1 to present an account of major components of the modern theory of empirical processes indexed by classes of sets and functions. The weak convergence theory developed in Part 1 is important for this, simply because the empirical processes studied in Part 2, Empirical Processes, are naturally viewed as taking values in nonseparable Banach spaces, even in the most elementary cases, and are typically not Borel measurable. Much of the theory presented in Part 2 has previously been scattered in the journal literature and has, as a result, been accessible only to a relatively small number of specialists. In view of the importance of this theory for statis­ tics, we hope that the presentation given here will make this theory more accessible to statisticians as well as to probabilists interested in statistical applications.

"...succeeds and complements Billingsleys classic work and will become the standard source of study and reference for students and researchers...." The Statistician
Buy options