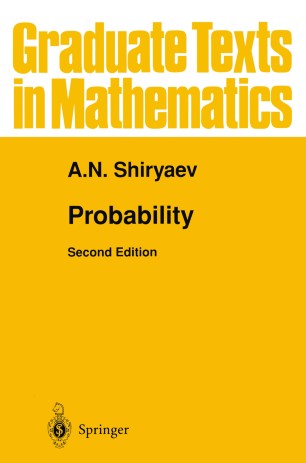 In the Preface to the first edition, originally published in 1980, we mentioned that this book was based on the author's lectures in the Department of Mechanics and Mathematics of the Lomonosov University in Moscow, which were issued, in part, in mimeographed form under the title "Probabil­ ity, Statistics, and Stochastic Processors, I, II" and published by that Univer­ sity. Our original intention in writing the first edition of this book was to divide the contents into three parts: probability, mathematical statistics, and theory of stochastic processes, which corresponds to an outline of a three­ semester course of lectures for university students of mathematics. However, in the course of preparing the book, it turned out to be impossible to realize this intention completely, since a full exposition would have required too much space. In this connection, we stated in the Preface to the first edition that only probability theory and the theory of random processes with discrete time were really adequately presented. Essentially all of the first edition is reproduced in this second edition. Changes and corrections are, as a rule, editorial, taking into account com­ ments made by both Russian and foreign readers of the Russian original and ofthe English and Germantranslations [Sll]. The author is grateful to all of these readers for their attention, advice, and helpful criticisms. In this second English edition, new material also has been added, as follows: in Chapter 111, §5, §§7-12; in Chapter IV, §5; in Chapter VII, §§8-10.