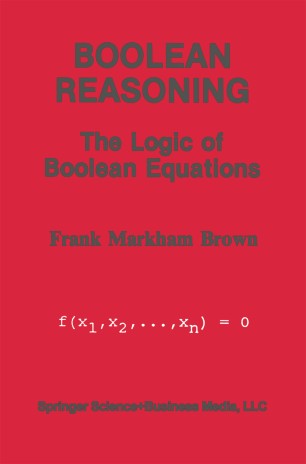 The Logic of Boolean Equations

This book is about the logic of Boolean equations. Such equations were central in the "algebra of logic" created in 1847 by Boole [12, 13] and devel­ oped by others, notably Schroder [178], in the remainder of the nineteenth century. Boolean equations are also the language by which digital circuits are described today. Logicians in the twentieth century have abandoned Boole's equation­ based logic in favor of the more powerful predicate calculus. As a result, digital engineers-and others who use Boole's language routinely-remain largely unaware of its utility as a medium for reasoning. The aim of this book, accordingly, is to is to present a systematic outline of the logic of Boolean equations, in the hope that Boole's methods may prove useful in solving present-day problems. Two Logical Languages Logic seeks to reduce reasoning to calculation. Two main languages have been developed to achieve that object: Boole's "algebra of logic" and the predicate calculus. Boole's approach was to represent classes (e. g. , happy creatures, things productive of pleasure) by symbols and to represent logical statements as equations to be solved. His formulation proved inadequate, however, to represent ordinary discourse. A number of nineteenth-century logicians, including Jevons [94], Poretsky [159], Schroder [178], Venn [210], and Whitehead [212, 213], sought an improved formulation based on ex­ tensions or modifications of Boole's algebra. These efforts met with only limited success.