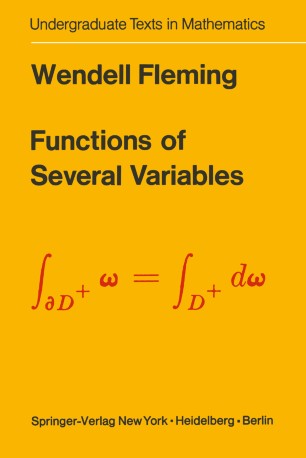 The purpose of this book is to give a systematic development of differential and integral calculus for functions of several variables. The traditional topics from advanced calculus are included: maxima and minima, chain rule, implicit function theorem, multiple integrals, divergence and Stokes's theorems, and so on. However, the treatment differs in several important respects from the traditional one. Vector notation is used throughout, and the distinction is maintained between n-dimensional euclidean space En and its dual. The elements of the Lebesgue theory of integrals are given. In place of the traditional vector analysis in £3, we introduce exterior algebra and the calculus of exterior differential forms. The formulas of vector analysis then become special cases of formulas about differential forms and integrals over manifolds lying in P. The book is suitable for a one-year course at the advanced undergraduate level. By omitting certain chapters, a one semester course can be based on it. For instance, if the students already have a good knowledge of partial differentiation and the elementary topology of P, then substantial parts of Chapters 4, 5, 7, and 8 can be covered in a semester. Some knowledge of linear algebra is presumed. However, results from linear algebra are reviewed as needed (in some cases without proof). A number of changes have been made in the first edition. Many of these were suggested by classroom experience. A new Chapter 2 on elementary topology has been added.