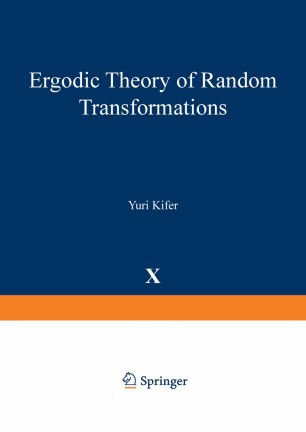 Part of the Progress in Probability and Statistics book series (PRPR, volume 10)

Ergodic theory of dynamical systems i.e., the qualitative analysis of iterations of a single transformation is nowadays a well developed theory. In 1945 S. Ulam and J. von Neumann in their short note [44] suggested to study ergodic theorems for the more general situation when one applies in turn different transforma­ tions chosen at random. Their program was fulfilled by S. Kakutani [23] in 1951. 'Both papers considered the case of transformations with a common invariant measure. Recently Ohno [38] noticed that this condition was excessive. Ergodic theorems are just the beginning of ergodic theory. Among further major developments are the notions of entropy and characteristic exponents. The purpose of this book is the study of the variety of ergodic theoretical properties of evolution processes generated by independent applications of transformations chosen at random from a certain class according to some probability distribution. The book exhibits the first systematic treatment of ergodic theory of random transformations i.e., an analysis of composed actions of independent random maps. This set up allows a unified approach to many problems of dynamical systems, products of random matrices and stochastic flows generated by stochastic differential equations.