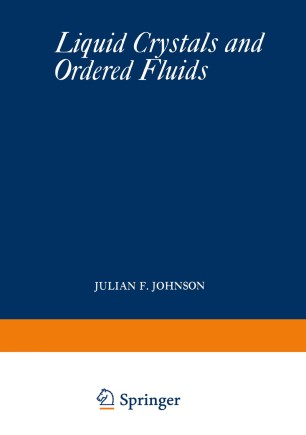 This volume contains papers presented at the Second Symposium on Ordered Fluids and Liquid Crystals held at the 158th National Meeting of the American Chemical Society, New York, Sep­ tember, 1969. The Symposium was sponsored by the Division of Colloid and Surface Chemistry. The proceedings for the first symposium on this subject were published by the American Chemical Society in the Advances in Chemistry Series. In the preface to the volume for the first meet­ ing held four years ago, we noted that research on liquid crystals had gone through tremendous fluctuations, with peaks of activity around 1900 and again in the early 1930's. The present period of high activity which started about 1960 has continued to exhibit acceleration. The reason for the persistent growth in the field is due to the increasing recognition of the important role played by liquid crystals in both biological systems and in items of commerce as diverse as detergents and electronic components. Addi­ tionally, more powerful and sophisticated instrumentation is pro­ viding a basis for understanding the properties of the liquid crystalline state as weIl as yielding inc~s~ve tests for the theories of mesophase structure which are only now reaching astate of maturity. Julian F. Johnson Roger S. Porter v CONTENTS Thermal Phase Transitions in Biomembranes • . • • • • • . • • 1 Joseph M. Steim Conditions of Stability for Liquid-Crystalline Phospholipid Membranes .