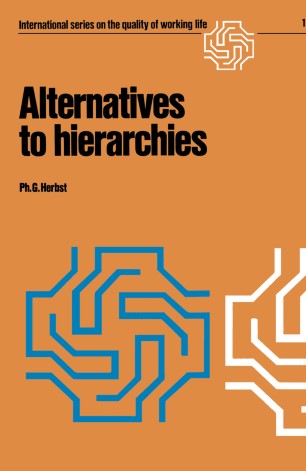 Part of the International series on the quality of working life book series (IQWL, volume 1)

Giving on occasions a talk on the subject of this book, one of the queries raised was, 'surely, what you mean are flat hierarchies'. This, I think, gives an indication of how difficult it can be to conceive of organizations which do not have a hierarchical structure. A rather similar response was obtained when, in the 1950's, an account was given to a manager of the British Coal Board of an autonomous composite team of more than 40 miners, who had taken over complete responsibility for a three-shift cycle, and divided the income obtained among themselves. His comment was that this could not possibly work. The new mode of work organization which had been evolved by the miners in several pits in the Durham coal fields was, at the time, well ahead of the prevailing concepts and philosophy of both management and the Trade Union. It did not help matters very much that the detailed accounts were presented in an academic and scientific form (Trist et aI. , 1963; Herbst, 1962). I think that we felt that all the backing of systematic research and data analysis would be needed to present the case for modes of organization, which deviated from conventional practice. However, something was learned from this experience. When at the beginning of the 1960's the Norwegian Work Democratization Project was started, a number of demonstration sites were set up which people could look at, and which could function as centers for diffusion.