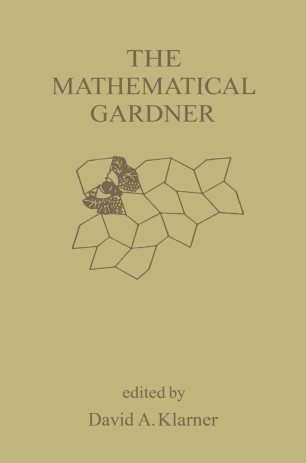 -~- T he articles in this book are dedicated to Martin Gardner, the world's greatest expositor and popularizer of mathematics. While our papers are confined to this single subject, Gardner's interests and accomplishments have a wide range of subjects. Hence, we have entitled the book the Mathematical Gardner, and would like to see other volumes such as the Magical, the Literary, the Philosophical, or the Scientific Gardner accompany it. Of course, our title is also an appropriate pun, for Martin Gardner's relationship to the mathematical community is similar to a gardener's relationship to a beautiful flower garden. The contributors to this volume comprise only a small part of a large body of mathematicians whose work has been nurtured by its exposition in "Mathematical Games"; Martin's column which appears every month in Scientific American. More than just a mathematical journalist, Martin connects his readers by passing along problems and information and stimulating creative activity. Thus, he is a force behind the scenes as well as a public figure. Two people were particularly helpful in putting this book together.