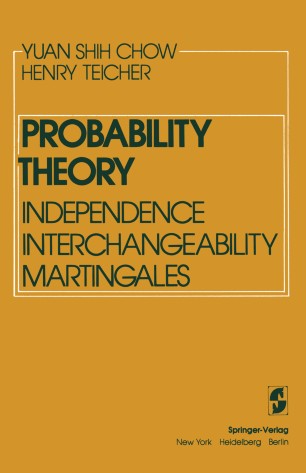 Probability theory is a branch of mathematics dealing with chance phenomena and has clearly discernible links with the real world. The origins of the sub­ ject, generally attributed to investigations by the renowned french mathe­ matician Fermat of problems posed by a gambling contemporary to Pascal, have been pushed back a century earlier to the italian mathematicians Cardano and Tartaglia about 1570 (Ore, 1953). Results as significant as the Bernoulli weak law of large numbers appeared as early as 1713, although its counterpart, the Borel strong law oflarge numbers, did not emerge until 1909. Central limit theorems and conditional probabilities were already being investigated in the eighteenth century, but the first serious attempts to grapple with the logical foundations of probability seem to be Keynes (1921), von Mises (1928; 1931), and Kolmogorov (1933). An axiomatic mold and measure-theoretic framework for probability theory was furnished by Kolmogorov. In this so-called objective or measure­ theoretic approach, definitions and axioms are so chosen that the empirical realization of an event is the outcome of a not completely determined physical experiment -an experiment which is at least conceptually capable of indefi­ nite repetition (this notion is due to von Mises). The concrete or intuitive counterpart of the probability of an event is a long run or limiting frequency of the corresponding outcome.