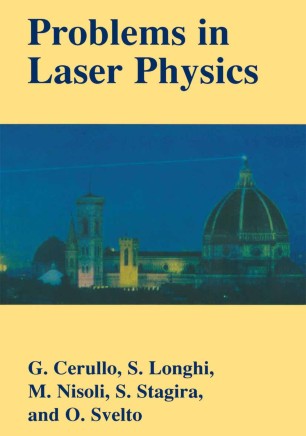 There is hardly any book that aims at solving problems typically encountered in the laser field, and this book intends to fill the void. Following some initial exercises related to general aspects in laser physics (Chapt. 1), the subsequent problems are organized along the following topics: (i) Interaction of radiation with matter either made of atoms or ions, weakly interacting with surrounding species, or made of more complicated elements such as molecules or semiconductors (Chapters 2 and 3). (ii) Wave propagation in optical media and optical resonators (Chapters 4 and 5). (iii) Optical and electrical pumping processes and systems (Chapter 6): (iv) Continuous wave and transient laser behaviors (Chapters 7 and 8). (v) Solid-state, dye, semiconductor, gas and X-ray lasers (Chapters 9 and 10). (vi) Proper­ ties of the output beam and beam transformation by amplification, frequency conversion and pulse compression or expansion (Chapters 11 and 12). Problems are proposed here and solved following the contents of Orazio Svelto's Principles of Lasers (fourth edition; Plenum Press, New York, 1998). Whenever needed, equations and figures of the book mentioned above are currently used with an appropriate reference [e. g. , Eq. (1. Ll) of the book is referred to as Eq. (Ll. 1) of PL]. One can observe, however, that the types of problems proposed and discussed are of general validity and many of these problems have actually been suggested by our own long-time experience in performing theoretical and experimental researches in the field.