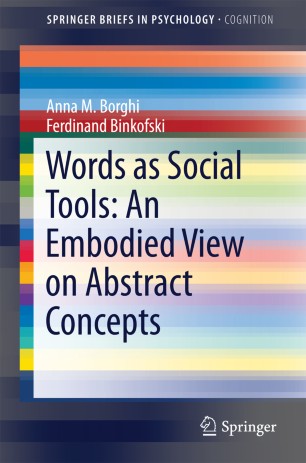 Words as Social Tools: An Embodied View on Abstract Concepts

How are abstract concepts and words represented in the brain? That is the central question addressed by the authors of “Words as Social Tools: An Embodied View on Abstract Concepts”. First, they focus on the difficulties in defining what abstract concepts and words are, and what they mean in psycholinguistic research. Then the authors go on to describe and critically discuss the main theories on this topic with a special emphasis on the different embodied and grounded theories proposed in cognitive psychology within the last ten years, highlighting the advantages and limitations of each of these theories. The core of this Brief consists of the presentation of a new theory developed by the authors, the WAT (Words As social Tools) view, according to which both sensorimotor (such as perception, action, emotional experiences) and linguistic experiences are at the basis of abstract concepts and of abstract word representation, processing and use. This theory assigns a major role to acquisition: one of the assumptions the authors make is that the different ways in which concrete and abstract words are acquired constrain their brain representation and their use. This view will be compared with the main existing theories on abstractness, from the theory of conceptual metaphors to the theories on multiple representation. Finally, the volume illustrates recent evidence from different areas (developmental, behavioral, cross-cultural, neuropsychological and neural) which converge with and support the authors' theory, leading to the conclusion that in order to account for representation and processing of abstract concepts and words, an extension of embodied and grounded theories is necessary.

Anna M. Borghi is an associate professor in Psychology at the University of Bologna; her research is conducted both at the Department of Psychology of the University of Bologna and at the Institute of Cognitive Sciences and Technologies, National Research Council in Rome, Italy. She has been a visiting scholar at various American universities (University of Chicago, University of Wisconsin-Madison, Emory University-Atlanta). She is Associate editor of the journal Frontiers in Cognition and of Psychological Research. She has just finished to coordinate the FP7 funded ROSSI (Emergence of Communication in Robots through Sensorimotor and Social Interaction) project. Her research themes include affordances, categorization, the relationships between concepts and perception and action and between language and the motor system, abstract concepts.

Ferdinand Binkofski is professor and chairman for Cognitive Neurology at the RWTH Aachen University, he is also affiliated with the Institute for Neuroscience and Medicine at the Research Center Jülich. In Aachen he is also heading study courses in speech and language pathology. Before his move to Aachen he was one of the managing directors of the Nouro Image Nord neuroimaging center of the north German universities of Hamburg, Kiel and Lübeck. He has managed or is still managing several national and international research networks in behavioral and cognitive neuroscience. His research is dedicated to higher motor control and cognitive neurology. He is exploring the link between action and perception and between the language and the motor system.