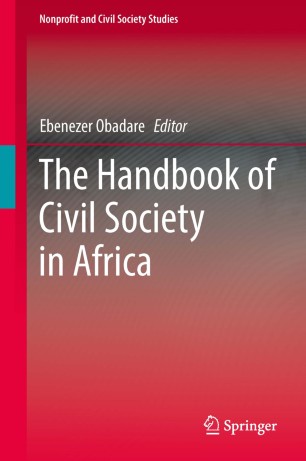 The Handbook of Civil Society in Africa

This volume brings together the most up to date analyses of civil society in Africa from the best scholars and researchers working on the subject. Being the first of its kind, it casts a panoramic look at the African continent, drawing out persisting, if often under-communicated, variations in regional discourses. In a majority of notionally ‘global’ studies, Africa has received marginal attention, a marginality often highlighted by the usual token chapter. Filling a critical hiatus, the Handbook of Civil Society in Africa takes Africa, African developments, and African perspectives very seriously and worthy of academic interrogation in their own right. It offers a critical, clear-sighted perspective on civil society in Africa, and positions African discourses within the framework of important regional and global debates. It promises to be an invaluable reference work for researchers and practitioners working in the fields of civil society, nonprofit studies, development studies, volunteerism, civic service, and African studies.

"This volume signposts a critical turning point in the renewed engagement with the theory and practice of civil society in Africa. Moving from traditional concerns with disquisitions on the appropriateness and possibility of the existence and vibrancy of the idea of civil society on the continent, the volume approaches the forms, contents, and features of the actually existing civil society in Africa from thematic, regional, and national angles.

It demonstrates clearly the extent to which core intellectual work on civil society in Africa has largely moved from concerns with cultural reductionism to a nuanced examination of the complexities of  (formal, non-formal, organizational, non-organizational, traditional, newer, usual, unusual) engagements, detailing the extent to which, over time, civil society as a concept has been indigenized, appropriated and adapted in the terrains of politics, society, economy, culture and new technologies on the continent.

In all this, the book accomplishes the near-impossible. Without sacrificing the vigour, rigor and freshness of the often unpredictable fruits of up-to-date research into regional and national differences that crop up in the documentation of Africa's multiple realities and discourses, the volume weaves together a rich tapestry of the historical, theoretical and practical dimensions of an expanding civil society sector, and accompanying growth in popular discourse, advocacy, and academic literature, in such a diverse continent as Africa, into a meaningful whole of insightful themes.

Written and edited by a very distinguished cross-continental and multi-disciplinary collection of researchers, research students, practitioners and activists, the volume provides cutting-edge evidence and makes a definitive case for a new lease of life for civil society research in Africa."

"Throughout Africa, forms of civic engagement and political participation have seen dynamic change in recent decades, yet conceptions of civil society have rarely accounted for this evolution. This volume is an essential source of new thinking about political association and collective action in Africa. The authors offer a wealth of analysis on changing organizations and social movements, new forms of interaction and communication, emerging strategies and issues, diverse social foundations, and the theoretical implications of a shifting associational landscape. The contributors provide an invaluable addition to the comparative literature on political change, democratic development, and social movements in Africa."