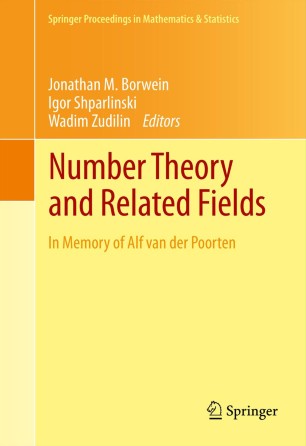 Number Theory and Related Fields collects contributions based on the proceedings of the “International Number Theory Conference in Memory of Alf van der Poorten,” hosted by CARMA and held March 12–16, 2012, at the University of Newcastle, Australia. The purpose of the conference was to commemorate the research and influence of Alf van der Poorten in number theory and in general mathematics and presented an exciting venue for promoting number-theoretic research and graduate study in Australia. Comprehensive accounts of recent achievements in theoretical and computational number theory and its applications to cryptography and theoretical computer science were also paramount to the conference.

The volume begins with a detailed academic appreciation of van der Poorten’s life and work, and includes research articles written by some of the most distinguished mathematicians in the field of number theory. Contributions also include related topics that focus on the various research interests of van der Poorten, such as continued fractions and elliptic curves. Researchers in number theory and its applications will find this Proceedings of great interest.