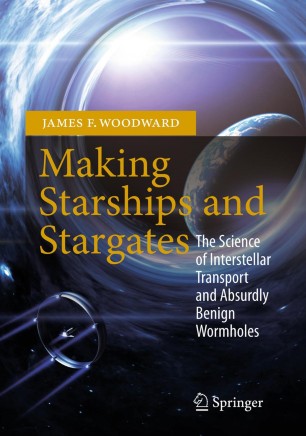 The Science of Interstellar Transport and Absurdly Benign Wormholes

What is needed to get around the galaxy quickly has been known in science fiction since at least the 1960s TV's Star Trek made famous "warp drive" and a bunch of attendant, less well-known "technologies." Some of the episodes even featured "stargates," portals to the distant past or future. Until the 1980s, all this was regarded in the serious scientific community as speculative, if entertaining, silliness. That situation changed when Kip Thorne, instigated by Carl Sagan, reverse engineered the general relativistic requirements for any technology purporting to enable such rapid spacetime transport.

The key requirement that Thorne identified was the creation of a Jupiter mass of "exotic" matter - that is, matter with negative rest mass. Thorne's work put discussion of rapid spacetime transport on the public agenda of serious science. It also set the benchmark for what has to be done to achieve truly advanced propulsion.

Being able to create the stupendous exotic mass of stuff needed to make stargates and warp drives is the holy grail of advanced propulsion. A less ambitious, but nonetheless revolutionary, goal is finding a way to accelerate a spaceship without having to lug along a gargantuan reservoir of fuel. And this may be possible. There has been progress on both the theoretical and experimental fronts since early 1990s.

Making Stars and Stargates has three parts. The first discusses the theories of relativity needed to understand the possible propulsion techniques. The second addresses experimental investigations into the feasibility of the predicted effects; that is, do the effects exist, and can they be applied to propulsion? The third part of the book - the most speculative - examines the questions: What physics is needed if we are to make wormholes and warp drives? Is such physics plausible? And how might we go about actually building such devices?