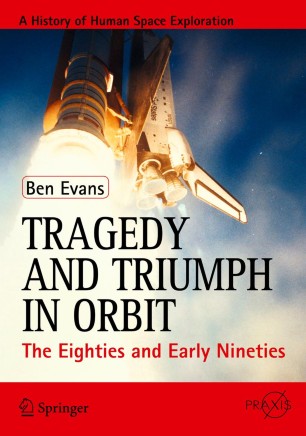 Tragedy and Triumph in Orbit

The Eighties and Early Nineties

April 12, 2011, was the 50th anniversary of Yuri Gagarin's pioneering journey into space. To commemorate this momentous achievement, Springer-Praxis is producing a mini series of books that reveals how humanity's knowledge of flying, working, and living in space has grown in the last half century.

Tragedy and Triumph in Orbit, the fourth book in the series, explores the tumultuous events of the 1980s and the beginning of the 1990s, a time when a reinvigorated Cold War between the United States and the Soviet Union bred further distrust and intense competition between the two old foes. As the Shuttle sought to fulfill its mandate of regular, routine access to space, a fatal Achilles heel in the system remained undetected until, one freezing January day in 1986, it made itself known with horrifying suddenness on millions of television screens across the world.

Systemic flaws, and the urgent need to resolve them, led to several years of introspection, while the Soviet program seemed to prosper and cosmonauts spent longer periods in space than ever before. By the end of the 1980s, a pair of Soviet success masked political changes on the ground, changes which would dramatically turn a once-proud human space program into a mere shadow of what it was. The consequence would be a rocky road to an unlikely partnership.