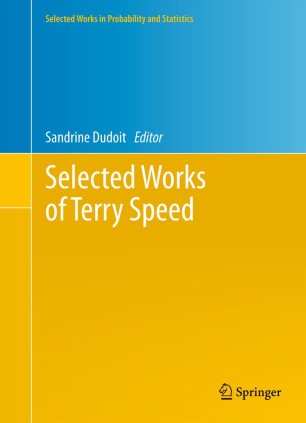 The purpose of this volume is to provide an overview of Terry Speed’s contributions to statistics and beyond. Each of the fifteen chapters concerns a particular area of research and consists of a commentary by a subject-matter expert and selection of representative papers. The chapters, organized more or less chronologically in terms of Terry’s career, encompass a wide variety of mathematical and statistical domains, along with their application to biology and medicine. Accordingly, earlier chapters tend to be more theoretical, covering some algebra and probability theory, while later chapters concern more recent work in genetics and genomics. The chapters also span continents and generations, as they present research done over four decades, while crisscrossing the globe.

The commentaries provide insight into Terry’s contributions to a particular area of research, by summarizing his work and describing its historical and scientific context, motivation, and impact. In addition to shedding light on Terry’s scientific achievements, the commentaries reveal endearing aspects of his personality, such as his intellectual curiosity, energy, humor, and generosity.

“This massive book of 665 pages contains 42 papers written by Terry, both alone and with various co-authors, and provides ‘an overview of Terry Speed’s contributions to statistics and beyond’. … The presentation by Springer is excellent. All in all, this is a first class offering, and comprises a noble and impressive tribute to Terry Speed by his colleagues and co-workers.” (Norman R. Draper, International Statistical Review, Vol. 81 (1), 2013)

“This is a nice collection of statistical and related works and provides a historical perspective of some of the important work in statistical fields produced by Speed. Surely this volume will be of interest to researchers in statistical genetics, microarray data analysis, and other related fields.” (Technometrics, Vol. 54 (4), November, 2012)