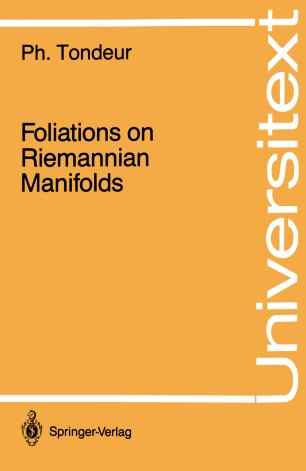 A first approximation to the idea of a foliation is a dynamical system, and the resulting decomposition of a domain by its trajectories. This is an idea that dates back to the beginning of the theory of differential equations, i.e. the seventeenth century. Towards the end of the nineteenth century, Poincare developed methods for the study of global, qualitative properties of solutions of dynamical systems in situations where explicit solution methods had failed: He discovered that the study of the geometry of the space of trajectories of a dynamical system reveals complex phenomena. He emphasized the qualitative nature of these phenomena, thereby giving strong impetus to topological methods. A second approximation is the idea of a foliation as a decomposition of a manifold into submanifolds, all being of the same dimension. Here the presence of singular submanifolds, corresponding to the singularities in the case of a dynamical system, is excluded. This is the case we treat in this text, but it is by no means a comprehensive analysis. On the contrary, many situations in mathematical physics most definitely require singular foliations for a proper modeling. The global study of foliations in the spirit of Poincare was begun only in the 1940's, by Ehresmann and Reeb.