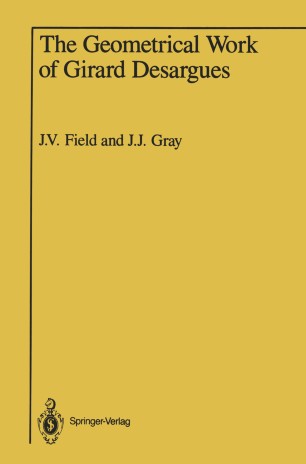 The Geometrical Work of Girard Desargues

Our main purpose in this book is to present an English translation of Desargues' Rough Draft of an Essay on the results of taking plane sections of a cone (1639), the pamphlet with which the modem study of projective geometry began. Despite its acknowledged importance in the history of mathematics, the work has never been translated before in its entirety, although short extracts have appeared in several source books. The problems of making Desargues' work accessible to modem mathematicians and historians of mathematics have led us to provide a fairly elaborate introduction, and to include translations of other relevant works. The translation ofthe Rough Draft on Conics (as we shall call it) thus appears in Chapter VI, the five preceding chapters forming an introduction and the three following ones giving translations of other works by Desargues. Chapter I briefly reviews parts of ancient geometrical works available to Desargues which seem to be relevant to his own work, namely theorems in Euclid's Elements, the first four books of Apollonius' Conics and some remarks by Pappus in his Collection. These Hellenistic works belong to the 'high' mathematical tradition whose development has been the main theme of all histories of mathematics. It is from these works that Desargues took the theorems whose theory he was to reformulate in the Rough Draft on Conics.