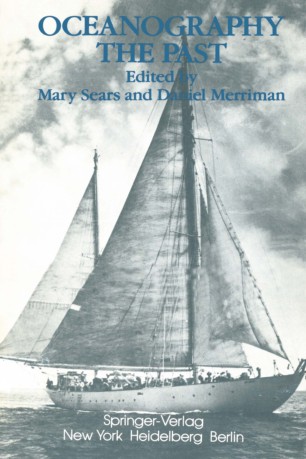 Proceedings of the Third International Congress on the History of Oceanography, held September 22–26, 1980 at the Woods Hole Oceanographic Institution, Woods Hole, Massachusetts, USA on the occasion of the Fiftieth Anniversary of the founding of the Institution

This volume, "Oceanography: The Past," is the Proceedings of the Third Inter­ national Congress on the History of Oceanography, organized under the auspices of the Woods Hole Oceanographic Institution at Woods Hole, Massachusetts, USA, September 22-26, 1980. The Congress is a part of the year-long celebration of the Fiftieth Anniversary of the founding of the Woods Hole Oceanographic Institution. It will be followed by an Assembly, September 29 -October 2, in which invited speakers will address the question, ''Will we use the oceans wisely-the next SO years in oceanogra­ phy?" The papers from the Assembly will also be published by Springer-Verlag as "Oceanography: The Present and Future," a companion volume to this book. The First International Congress on the History of Oceanography was held at the Musee Ocean~graphique in Monaco, December 12-17, 1966. It coincided with the centennial of the beginning of the distinguished career of Prince Albert I as a student and patron of oceanography, for it was in 1866 that he first went to sea-on the armored frigate Tetuan of the Royal Spanish Navy. The results of this Congress were published as 57 papers in the Bulletin de l'Institut Oceanogra­ phique (special no. 2, vols. 1-3, pp. XLII + 807, 1968).