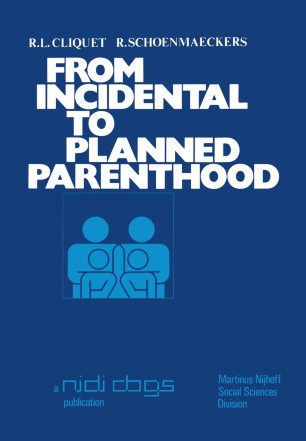 From incidental to planned parenthood

Part of the Publications of the Netherlands Interuniversity Demographic Institute (N.I.D.I.) and the Population and Family Study Centre (C.B.G.S.) book series (NIDI, volume 2)

In 1971, the Dutch-language branch of the Population and Family Study Centre (CBGS)* of the Department of Public Health and the Family organized, in collaboration with investigators from the Rijksuniversiteit Gent, the Katholieke Universiteit Leuven, and the Vrije Universiteit Brussels, the Second National Fertility Survey in Belgium (NEGO 11)** (Cliquet et al. , 1970). NEGO II was a result of and related to the First National Fertility Survey performed in Belgium (NEGO I) in 1966 (Cliquet, 1967; Morsa, 1967). Both of these surveys were modelled on the Growth of American Families (GAF) studies performed at fiveyear intervals in the United States since 1955 (Freedman et al. , 1959; Whelpton et al. , 1966; Ryder and Westoff, 1971). Meanwhile, plans were made for the Third National Survey (NEGO III) in Belgium (CBGS Annual Report, 1975, 54). The CBGS fertility surveys (NEGO I-II-III) form part of the interdisciplinary research programme on the mating and reproductive behaviour of the Belgian population. In addition to these surveys, special investigations are performed in the Departments of Gynaecology and Obstetrics of various universities in Belgium. In the American surveys and similar studies done in many other countries, particularly those performed as part of the World Fertility Survey, the main emphasis has been given to the socio-demographic investigation of realized fertility and family planning. The approach applied by the CBGS has from the start placed these problems, both thematically and scientifically, in a wider perspective.