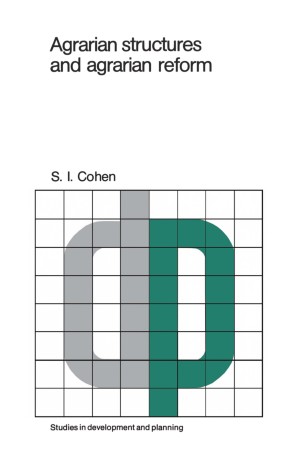 Part of the Studies in development and planning book series (SDAP, volume 8)

This study is an attempt to contribute to our understanding of one of the most important reforms currently advocated by development economists to reduce rural poverty in developing countries: land reform. Dr. Cohen has based his study on models in which three social groups are acting: these, for brevity's sake, are called land­ lords, peasants and the groups who comprise the non-agricultural sector. Peasants include the so-called landless peasants which western countries generally term agrarian workers. The method can be extended to larger numbers of groups. The actors are involved in various activities, including production, consumption and saving, the latter being available either for physical or for financial invest­ ment. This implies that various wealth components appear in the model alongside flows of goods and services. Use is made of determinate models with linear and non-linear equations of a dynamic character. The models are employed to estimate socio-economic development under alternative regimes. Regimes differ, on the one hand, according to which group is in power and, on the other hand, according to the instruments of economic policy they use. It is an attractive feature of Dr. Cohen's study that the models are applied to two countries for which all the necessary statistical material has been estimated: India and Chile. For both countries a brief socio-political sketch precedes the numerical application of the models. For India five instruments of socio-economic policy are considered: land transfers, measures to stimulate productivity, credit policies, taxes and tenure and wage regulations.