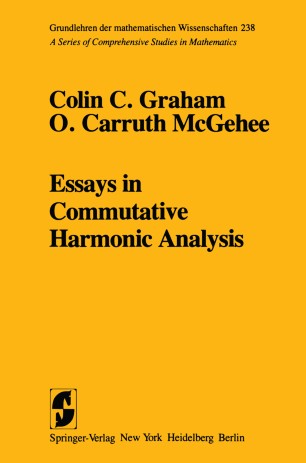 This book considers various spaces and algebras made up of functions, measures, and other objects-situated always on one or another locally compact abelian group, and studied in the light of the Fourier transform. The emphasis is on the objects themselves, and on the structure-in-detail of the spaces and algebras. A mathematician needs to know only a little about Fourier analysis on the commutative groups, and then may go many ways within the large subject of harmonic analysis-into the beautiful theory of Lie group representations, for example. But this book represents the tendency to linger on the line, and the other abelian groups, and to keep asking questions about the structures thereupon. That tendency, pursued since the early days of analysis, has defined a field of study that can boast of some impressive results, and in which there still remain unanswered questions of compelling interest. We were influenced early in our careers by the mathematicians Jean-Pierre Kahane, Yitzhak Katznelson, Paul Malliavin, Yves Meyer, Joseph Taylor, and Nicholas Varopoulos. They are among the many who have made the field a productive meeting ground of probabilistic methods, number theory, diophantine approximation, and functional analysis. Since the academic year 1967-1968, when we were visitors in Paris and Orsay, the field has continued to see interesting developments. Let us name a few. Sam Drury and Nicholas Varopoulos solved the union problem for Helson sets, by proving a remarkable theorem (2.1.3) which has surely not seen its last use.