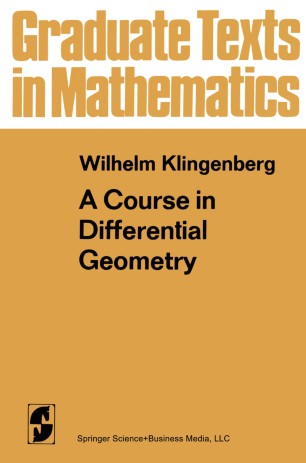 A Course in Differential Geometry

This English edition could serve as a text for a first year graduate course on differential geometry, as did for a long time the Chicago Notes of Chern mentioned in the Preface to the German Edition. Suitable references for ordin­ ary differential equations are Hurewicz, W. Lectures on ordinary differential equations. MIT Press, Cambridge, Mass., 1958, and for the topology of surfaces: Massey, Algebraic Topology, Springer-Verlag, New York, 1977. Upon David Hoffman fell the difficult task of transforming the tightly constructed German text into one which would mesh well with the more relaxed format of the Graduate Texts in Mathematics series. There are some e1aborations and several new figures have been added. I trust that the merits of the German edition have survived whereas at the same time the efforts of David helped to elucidate the general conception of the Course where we tried to put Geometry before Formalism without giving up mathematical rigour. 1 wish to thank David for his work and his enthusiasm during the whole period of our collaboration. At the same time I would like to commend the editors of Springer-Verlag for their patience and good advice. Bonn Wilhelm Klingenberg June,1977 vii From the Preface to the German Edition This book has its origins in a one-semester course in differential geometry which 1 have given many times at Gottingen, Mainz, and Bonn.