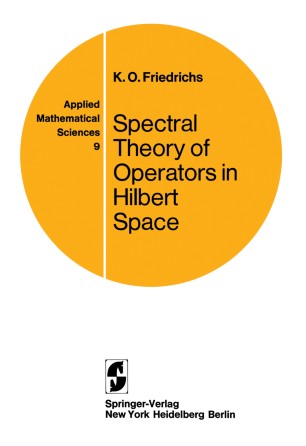 The present lectures intend to provide an introduction to the spectral analysis of self-adjoint operators within the framework of Hilbert space theory. The guiding notion in this approach is that of spectral representation. At the same time the notion of function of an operator is emphasized. The formal aspects of these concepts are explained in the first two chapters. Only then is the notion of Hilbert space introduced. The following three chapters concern bounded, completely continuous, and non-bounded operators. Next, simple differential operators are treated as operators in Hilbert space, and the final chapter deals with the perturbation of discrete and continuous spectra. The preparation of the original version of these lecture notes was greatly helped by the assistance of P. Rejto. Various valuable suggestions made by him and by R. Lewis have been incorporated. The present version of the notes contains extensive modifica­ tions, in particular in the chapters on bounded and unbounded operators. February, 1973 K.O.F. PREFACE TO THE SECOND PRINTING The second printing (1980) is a basically unchanged reprint in which a number of minor errors were corrected. The author wishes to thank Klaus Schmidt (Lausanne) and John Sylvester (New York) for their lists of errors. v TABLE OF CONTENTS I. Spectral Representation 1 1. Three typical problems 1 12 2. Linear space and functional representation.