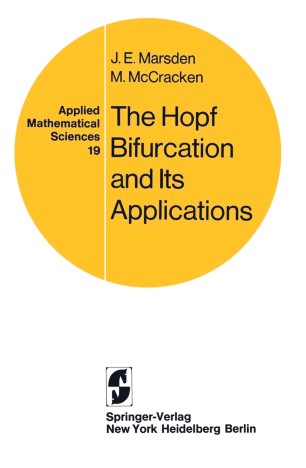 The Hopf Bifurcation and Its Applications

The goal of these notes is to give a reasonahly com­ plete, although not exhaustive, discussion of what is commonly referred to as the Hopf bifurcation with applications to spe­ cific problems, including stability calculations. Historical­ ly, the subject had its origins in the works of Poincare [1] around 1892 and was extensively discussed by Andronov and Witt [1] and their co-workers starting around 1930. Hopf's basic paper [1] appeared in 1942. Although the term "Poincare­ Andronov-Hopf bifurcation" is more accurate (sometimes Friedrichs is also included), the name "Hopf Bifurcation" seems more common, so we have used it. Hopf's crucial contribution was the extension from two dimensions to higher dimensions. The principal technique employed in the body of the text is that of invariant manifolds. The method of Ruelle­ Takens [1] is followed, with details, examples and proofs added. Several parts of the exposition in the main text come from papers of P. Chernoff, J. Dorroh, O. Lanford and F. Weissler to whom we are grateful. The general method of invariant manifolds is common in dynamical systems and in ordinary differential equations: see for example, Hale [1,2] and Hartman [1]. Of course, other methods are also available. In an attempt to keep the picture balanced, we have included samples of alternative approaches. Specifically, we have included a translation (by L. Howard and N. Kopell) of Hopf's original (and generally unavailable) paper.