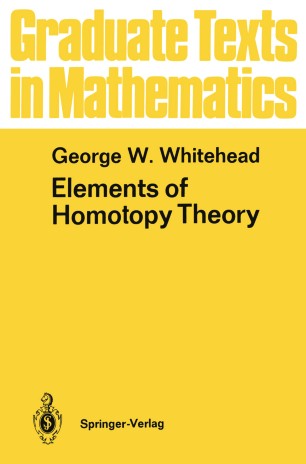 As the title suggests, this book is concerned with the elementary portion of the subject of homotopy theory. It is assumed that the reader is familiar with the fundamental group and with singular homology theory, including the Universal Coefficient and Kiinneth Theorems. Some acquaintance with manifolds and Poincare duality is desirable, but not essential. Anyone who has taught a course in algebraic topology is familiar with the fact that a formidable amount of technical machinery must be introduced and mastered before the simplest applications can be made. This phenomenon is also observable in the more advanced parts of the subject. I have attempted to short-circuit it by making maximal use of elementary methods. This approach entails a leisurely exposition in which brevity and perhaps elegance are sacrificed in favor of concreteness and ease of application. It is my hope that this approach will make homotopy theory accessible to workers in a wide range of other subjects-subjects in which its impact is beginning to be felt. It is a consequence of this approach that the order of development is to a certain extent historical. Indeed, if the order in which the results presented here does not strictly correspond to that in which they were discovered, it nevertheless does correspond to an order in which they might have been discovered had those of us who were working in the area been a little more perspicacious.