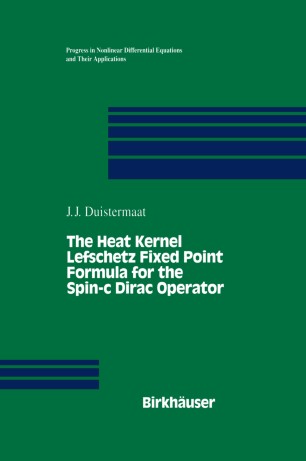 Part of the Progress in Nonlinear Differential Equations and their Applications book series (PNLDE, volume 18)

When visiting M.I.T. for two weeks in October 1994, Victor Guillemin made me enthusiastic about a problem in symplectic geometry which involved the use of the so-called spin-c Dirac operator. Back in Berkeley, where I had l spent a sabbatical semester , I tried to understand the basic facts about this operator: its definition, the main theorems about it, and their proofs. This book is an outgrowth of the notes in which I worked this out. For me this was a great learning experience because of the many beautiful mathematical structures which are involved. I thank the Editorial Board of Birkhauser, especially Haim Brezis, for sug­ gesting the publication of these notes as a book. I am also very grateful for the suggestions by the referees, which have led to substantial improvements in the presentation. Finally I would like to express special thanks to Ann Kostant for her help and her prodding me, in her charming way, into the right direction. J.J. Duistermaat Utrecht, October 16, 1995.

Duistermaat was affiliated to the Mathematical Institute of Utrecht University since 1974 as a Professor of Pure and Applied Mathematics. During the last five years he was honored with a special professorship at Utrecht University endowed by the Royal Netherlands Academy of Arts and Sciences. He was also a member of the Academy since 1982. He had 23 PhD students.