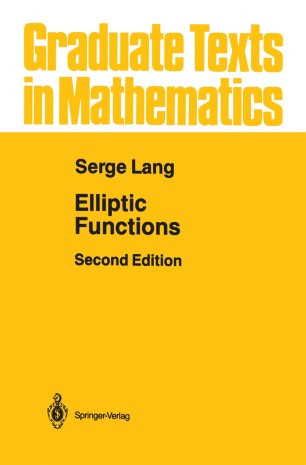 Elliptic functions parametrize elliptic curves, and the intermingling of the analytic and algebraic-arithmetic theory has been at the center of mathematics since the early part of the nineteenth century. The book is divided into four parts. In the first, Lang presents the general analytic theory starting from scratch. Most of this can be read by a student with a basic knowledge of complex analysis. The next part treats complex multiplication, including a discussion of Deuring's theory of l-adic and p-adic representations, and elliptic curves with singular invariants. Part three covers curves with non-integral invariants, and applies the Tate parametrization to give Serre's results on division points. The last part covers theta functions and the Kronecker Limit Formula. Also included is an appendix by Tate on algebraic formulas in arbitrary charactistic.