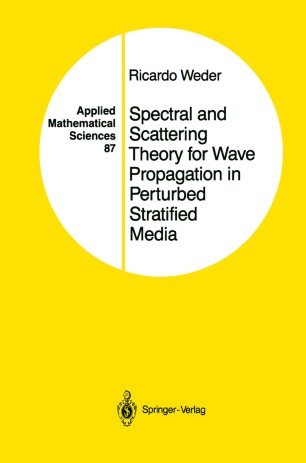 The propagation of acoustic and electromagnetic waves in stratified media is a subject that has profound implications in many areas of applied physics and in engineering, just to mention a few, in ocean acoustics, integrated optics, and wave guides. See for example Tolstoy and Clay 1966, Marcuse 1974, and Brekhovskikh 1980. As is well known, stratified media, that is to say media whose physical properties depend on a single coordinate, can produce guided waves that propagate in directions orthogonal to that of stratification, in addition to the free waves that propagate as in homogeneous media. When the stratified media are perturbed, that is to say when locally the physical properties of the media depend upon all of the coordinates, the free and guided waves are no longer solutions to the appropriate wave equations, and this leads to a rich pattern of wave propagation that involves the scattering of the free and guided waves among each other, and with the perturbation. These phenomena have many implications in applied physics and engineering, such as in the transmission and reflexion of guided waves by the perturbation, interference between guided waves, and energy losses in open wave guides due to radiation. The subject matter of this monograph is the study of these phenomena.