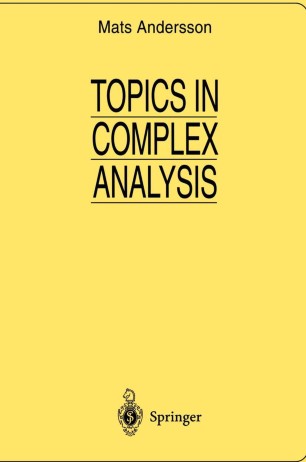 Part of the Universitex: Tracts in Mathematics book series (UTX)

This book is an outgrowth of lectures given on several occasions at Chalmers University of Technology and Goteborg University during the last ten years. As opposed to most introductory books on complex analysis, this one as­ sumes that the reader has previous knowledge of basic real analysis. This makes it possible to follow a rather quick route through the most fundamen­ tal material on the subject in order to move ahead to reach some classical highlights (such as Fatou theorems and some Nevanlinna theory), as well as some more recent topics (for example, the corona theorem and the HI_ BMO duality) within the time frame of a one-semester course. Sections 3 and 4 in Chapter 2, Sections 5 and 6 in Chapter 3, Section 3 in Chapter 5, and Section 4 in Chapter 7 were not contained in my original lecture notes and therefore might be considered special topics. In addition, they are completely independent and can be omitted with no loss of continuity. The order of the topics in the exposition coincides to a large degree with historical developments. The first five chapters essentially deal with theory developed in the nineteenth century, whereas the remaining chapters contain material from the early twentieth century up to the 1980s. Choosing methods of presentation and proofs is a delicate task. My aim has been to point out connections with real analysis and harmonic anal­ ysis, while at the same time treating classical complex function theory.