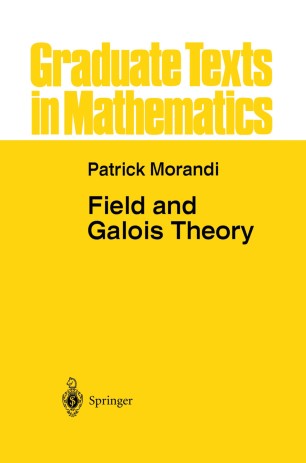 In the fall of 1990, I taught Math 581 at New Mexico State University for the first time. This course on field theory is the first semester of the year-long graduate algebra course here at NMSU. In the back of my mind, I thought it would be nice someday to write a book on field theory, one of my favorite mathematical subjects, and I wrote a crude form of lecture notes that semester. Those notes sat undisturbed for three years until late in 1993 when I finally made the decision to turn the notes into a book. The notes were greatly expanded and rewritten, and they were in a form sufficient to be used as the text for Math 581 when I taught it again in the fall of 1994. Part of my desire to write a textbook was due to the nonstandard format of our graduate algebra sequence. The first semester of our sequence is field theory. Our graduate students generally pick up group and ring theory in a senior-level course prior to taking field theory. Since we start with field theory, we would have to jump into the middle of most graduate algebra textbooks. This can make reading the text difficult by not knowing what the author did before the field theory chapters. Therefore, a book devoted to field theory is desirable for us as a text. While there are a number of field theory books around, most of these were less complete than I wanted.