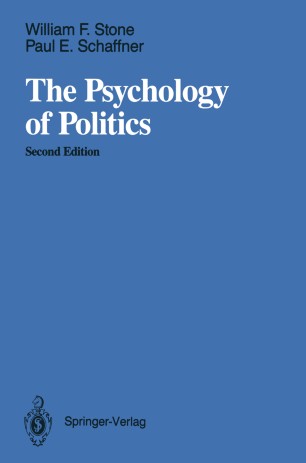 The Psychology of Politics is an introduction to political psychology. The field has a long past, but as an organized discipline, it has a short history. The long past is detailed in Jaap van Ginneken's historical first chapter of the book. The short history of political psychology as an organized disci­ pline dates from 1978, when the International Society of Political Psychol­ ogy (ISPP) was founded (Stone, 1981, 1988). The formal establishment of an interdiscipline drawing upon various social sciences had numerous predecessors in the 20th century: Wallas's (1908) Human Nature in Politics, Harold Lasswell's Psychopathology and Politics in 1930, a book with the present title by Eysenck (1954), and The Handbook of Political Psychology, edited by the founder of the ISPP, Jeanne Knutson. Her Handbook defined the field at the time of its publication in 1973 (see espe­ cially Davies' chapter). The present revision of Stone's (1974) work is more modest in its aspira­ tions. It provides a selective introduction to the field, emphasizing topics that the authors believe to be representative and important. Many psycho­ logically relevant topics, such as political socialization, participation, voting behavior, and leadership, are not represented among our chapter titles.