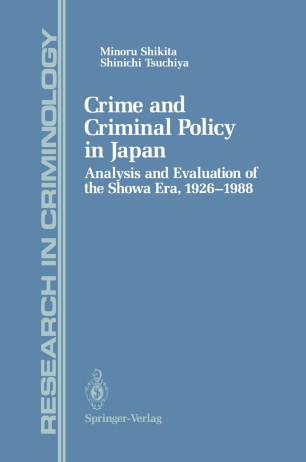 The Showa Era in Japan commenced in December 1926, when Emperor Showa ascended the Throne, and came to an end in January 1989, when His Majesty passed away, ushering in the new Heisei Era. The Showa Era was marked by drastic changes in the economy, society, and political and legal sys­ tems, which brought about an ebb and flow in criminality and precipitated various criminal policies. From an economical, political, and criminological perspective, the Showa Era stands out as a remarkable period in Japanese his­ tory. The Research and Training Institute of the Ministry of Justice, which has annually published the White Paper on Crime in Japan since 1960, received Cabinet approval to introduce a special topic section, "Criminal Policy in Sho­ wa" in the White Paper for 1989, which was published in October the same year. This White Paper is the first comprehensive publication that deals not only with the crime situation but also with the various activities of the criminal justice system, including the police, public prosecutors' offices, courts, correctional institutions, and probation and parole supervision organisations for 63 years.