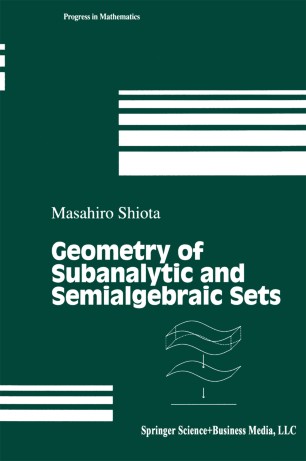 Part of the Progress in Mathematics book series (PM, volume 150)

Real analytic sets in Euclidean space (Le. , sets defined locally at each point of Euclidean space by the vanishing of an analytic function) were first investigated in the 1950's by H. Cartan [Car], H. Whitney [WI-3], F. Bruhat [W-B] and others. Their approach was to derive information about real analytic sets from properties of their complexifications. After some basic geometrical and topological facts were established, however, the study of real analytic sets stagnated. This contrasted the rapid develop­ ment of complex analytic geometry which followed the groundbreaking work of the early 1950's. Certain pathologies in the real case contributed to this failure to progress. For example, the closure of -or the connected components of-a constructible set (Le. , a locally finite union of differ­ ences of real analytic sets) need not be constructible (e. g. , R - {O} and 3 2 2 { (x, y, z) E R : x = zy2, x + y2 -=I- O}, respectively). Responding to this in the 1960's, R. Thorn [Thl], S. Lojasiewicz [LI,2] and others undertook the study of a larger class of sets, the semianalytic sets, which are the sets defined locally at each point of Euclidean space by a finite number of ana­ lytic function equalities and inequalities. They established that semianalytic sets admit Whitney stratifications and triangulations, and using these tools they clarified the local topological structure of these sets. For example, they showed that the closure and the connected components of a semianalytic set are semianalytic.

"The main interest of the book is that it contains very deep results, some of which are new even for subanalytic or semialgebraic sets... These results are very important and provide foundations for the development of a 'tame topology' and a 'tame singularity theory.' Shiota's book is indispensable to every mathematician interested in these topics."

-Bulletin of the AMS