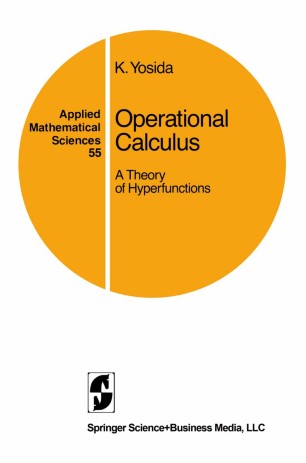 In the end of the last century, Oliver Heaviside inaugurated an operational calculus in connection with his researches in electromagnetic theory. In his operational calculus, the operator of differentiation was denoted by the symbol "p". The explanation of this operator p as given by him was difficult to understand and to use, and the range of the valid­ ity of his calculus remains unclear still now, although it was widely noticed that his calculus gives correct results in general. In the 1930s, Gustav Doetsch and many other mathematicians began to strive for the mathematical foundation of Heaviside's operational calculus by virtue of the Laplace transform -pt e f(t)dt. ( However, the use of such integrals naturally confronts restrictions con­ cerning the growth behavior of the numerical function f(t) as t ~ ~. At about the midcentury, Jan Mikusinski invented the theory of con­ volution quotients, based upon the Titchmarsh convolution theorem: If f(t) and get) are continuous functions defined on [O,~) such that the convolution f~ f(t-u)g(u)du =0, then either f(t) =0 or get) =0 must hold. The convolution quotients include the operator of differentiation "s" and related operators. Mikusinski's operational calculus gives a satisfactory basis of Heaviside's operational calculus; it can be applied successfully to linear ordinary differential equations with constant coefficients as well as to the telegraph equation which includes both the wave and heat equa­ tions with constant coefficients.