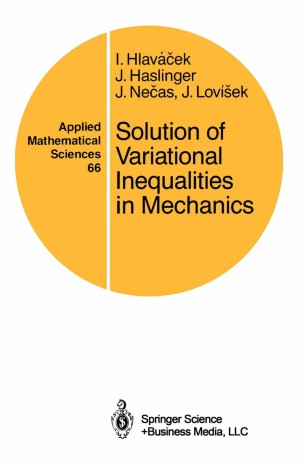 Solution of Variational Inequalities in Mechanics

The idea for this book was developed in the seminar on problems of con­ tinuum mechanics, which has been active for more than twelve years at the Faculty of Mathematics and Physics, Charles University, Prague. This seminar has been pursuing recent directions in the development of mathe­ matical applications in physics; especially in continuum mechanics, and in technology. It has regularly been attended by upper division and graduate students, faculty, and scientists and researchers from various institutions from Prague and elsewhere. These seminar participants decided to publish in a self-contained monograph the results of their individual and collective efforts in developing applications for the theory of variational inequalities, which is currently a rapidly growing branch of modern analysis. The theory of variational inequalities is a relatively young mathematical discipline. Apparently, one of the main bases for its development was the paper by G. Fichera (1964) on the solution of the Signorini problem in the theory of elasticity. Later, J. L. Lions and G. Stampacchia (1967) laid the foundations of the theory itself. Time-dependent inequalities have primarily been treated in works of J. L. Lions and H. Bnlzis. The diverse applications of the variational in­ equalities theory are the topics of the well-known monograph by G. Du­ vaut and J. L. Lions, Les iniquations en micanique et en physique (1972).